An article about the job creation efforts in the construction of the Kafue Gorge Lower Hydropower Project by Sinohydro Corporation of China was published in the Times of Zambia on October 11.

The Kafue Gorge Lower Hydropower Power Station is located on the Kafue River in Southern Chikankata district, Zambia, with a total installed capacity of 750 megawatts. It has five turbine power generating units, with each having a capacity of 150 megawatts. The height of the Kafue Gorge Lower Hydropower Station is 130.5 meters, and the station includes a spillway and a 4.5-kilometer-long diversion tunnel.

According to the article, since the hydropower station started construction in January 2016, it has employed over 14,000 people. Most of them are young, who have learned skills throughout the construction, and some of them have been promoted to senior positions. The project plays a positive role in improving the productivity of young people in Zambia and reducing drug abuse locally, said the article.

Fraser, a young man who worked in the project before starting his own company, was mentioned as an example in the article to show how Sinohydro helped him in his life and career.

The article also reported how Sinohydro fulfilled its corporate social responsibilities in Zambia, such as assisting the government in improving the living conditions of local communities and purchasing construction materials and consulting services from local manufacturers and service providers.

The article said that the construction of the Kafue Gorge Lower Hydropower Station will increase Zambia's power generation and benefit the country in many other ways. 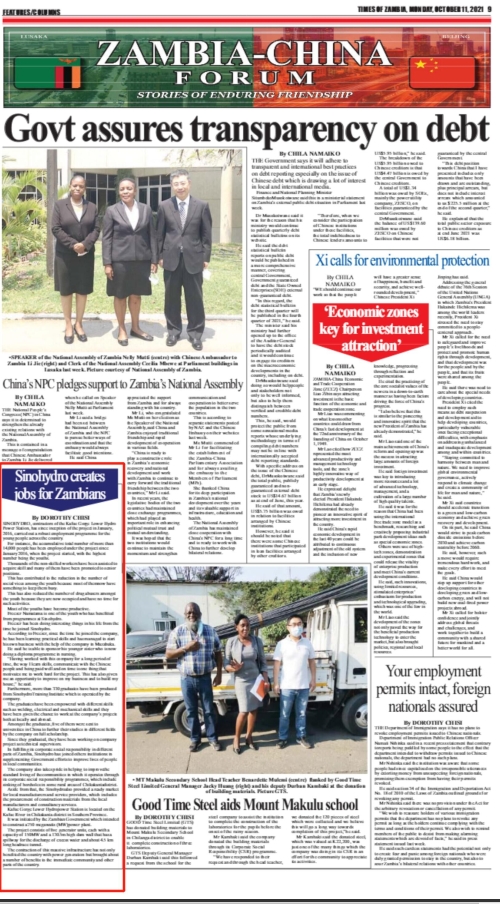