Nasrul Hamid, State Minister for the Ministry of Power, Energy, and Mineral Resources of Bangladesh, warmly praised the Barisal Power Station – invested in and constructed by POWERCHINA – on his personal Facebook page recently.

Hamid said that the connection of Barisal power station to the national grid would greatly improve the economic development of Bangladesh and the quality of life of its people. 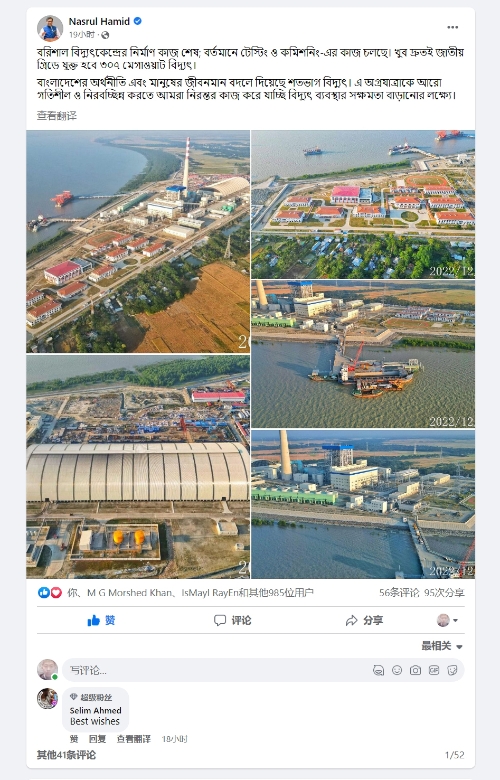 Nasrul Hamid, State Minister for the Ministry of Power, Energy, and Mineral Resources of Bangladesh, lauds the Barisal Power Station, invested in and constructed by POWERCHINA.

The power station is located in the Barguna district, in the Barisal division of Bangladesh, close to the Bay of Bengal. It has an important position in the Bangladesh-China-India-Myanmar Economic Corridor.

It is the first IPP (independent power producer) project invested in and constructed by a Chinese enterprise in Bangladesh.

After put into operation, the annual on-grid power generation capacity of the power station is projected to reach 2.28 billion kWh, which can meet the living needs of more than 5 million locals.

The construction of Barisal power station has fully adopted Chinese plans, technology and equipment. Relying on the advantages of the integration of POWERCHINA's whole industrial chain, the impact of the COVID-19 pandemic on the construction has reportedly been minimized.

Barisal power station was hailed as "one of the fastest construction projects during the pandemic" by the Bangladesh power authority.

In addition to providing clean and stable power supply for the local area, POWERCHINA is said to have fulfilled its social responsibilities, benefiting the local people's livelihoods.

Also, POWERCHINA has actively participated in social public welfare undertakings, such as donating to children in orphanages, repairing village roads, beautifying the community environment and donating pandemic prevention materials, which have been highly praised by locals.